The theme of The Open Group’s conference in Amsterdam last October was “Architecting the Digital Enterprise – Making Standards Work”. We had been invited to talk ostensibly about the ArchiMate Exchange Format, ArchiMate® 3.0, and how these work together. Archi is renowned for being a tool that delivers an “executable standard” as it is ubiquitous, accessible and open source. Here’s the official summary of the presentation that we gave:

ArchiMate® 3.0 was released in June 2016. This latest version of the language represents an important evolution of the open standard that is used for Enterprise Architecture modelling.

This new version of the Exchange Format not only supports the new concepts in the ArchiMate 3.0 specification but also supports the exchange of more advanced information such as custom viewpoints, concerns, and stakeholders and paves the way for adding new features such as model stereotypes.

In this presentation we outline the new features of the ArchiMate 3.0 Exchange Format and talk about its importance in terms of the exchange of ArchiMate models between tools and how this transparent data format is adding value to organisations by allowing them to visualise and analyse their data in new and interesting ways.

In addition to the original use case (exchange of models between tools) we’ll also speak about several new use-cases that uses the ArchiMate metamodel as a pivot for interesting things (information gathered through big data’s technologies, external scripting, CMDB exchange format together with CMDBf…).

As a summary that sounds pretty dry, so we thought about how to make this more interesting, given that we mention going “beyond modelling tools”. So we started our presentation in the future…

Beyond Modelling Tools – the EA Chatbot

Go forward in time, say five years, and imagine an EA Chatbot – an AI bot that you can talk to, interact with, and that could, for example, assist the Architect to quickly and easily find information about an in-house application, how it connects to other applications, and how it might be visualised. Let’s call the Chatbot “Archie“. We acted out the parts of JB as Architect, and Phil as the Chatbot: 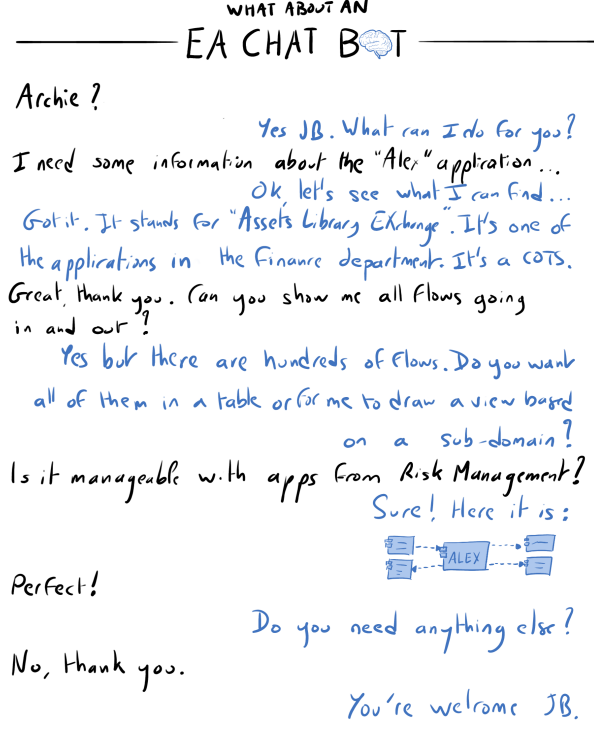 Now come back to the present, October 2017. Does such an EA Bot exist? No, not really. But we can make it happen by moving the focus away from conventional modelling tools and thinking (call them legacy, first-generation tooling) and tracing a development from ArchiMate as a language, through to the ArchiMate Open Exchange Format and then on to Open Data, and, once we have that, to open tooling, paired with machine learning and natural language processing. This was presented as a simple equation: 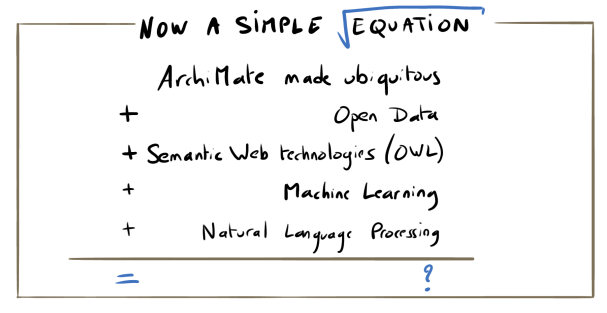 J-B Sarrodie intends to go into greater depth about the EA Chatbot and the other aspects of the equation in a future blog post, so stay tuned.

We spoke a little about the history of the ArchiMate Open Exchange Format, its genesis, how it has been adopted, and how numerous users and developers have been empowered by having access to transparent data (vs. closed, proprietary data formats). We then covered the new changes introduced in ArchiMate 3.0, the need for an updated version of the Exchange Format and how users are taking the data and doing new and unexpected things with it. As Eric S. Raymond said:

And, it turns out, that the “truly great tool” in this case is not a desktop application, but rather the open data that the Exchange Format provides. We gave some examples of how users are manipulating and visualising this data, and how, for some organizations, it’s essential for them to archive their data in an open format (the EIRA project, for example).

The above is a brief summary of the presentation and, as I mentioned, JB intends to write more in detail about the EA Chatbot and other aspects in a future blog post, so stay tuned.

Here’s the static overview image of the presentation (once again, lovingly hand-drawn by JB): 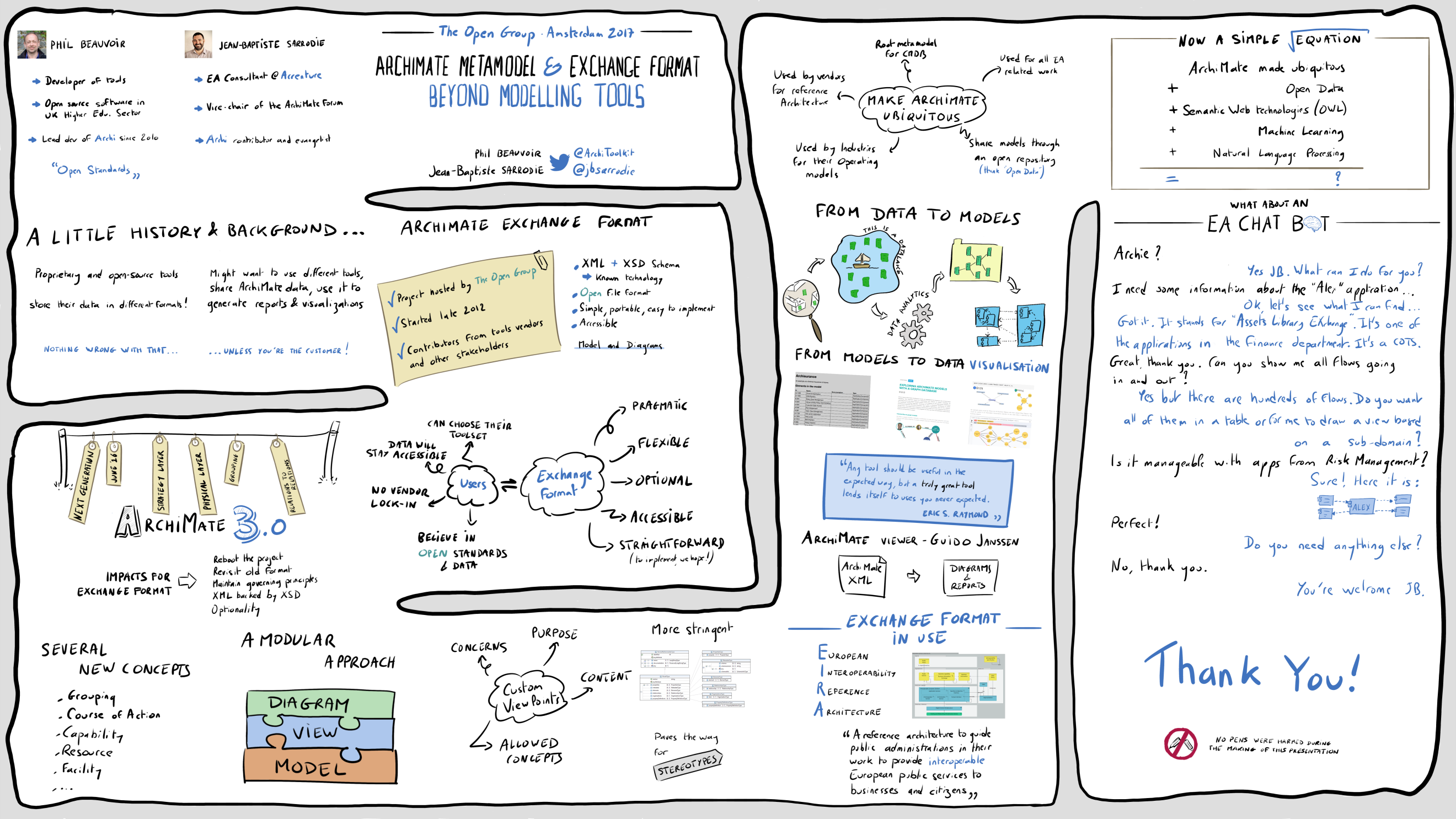 And you can also view the full interactive Sozi presentation here.

The first meeting of the ArchiMate Users Group was also held in Amsterdam during the conference. Over 50 people attended this, with a panel consisting of a broad range of representatives (including J-B Sarrodie). Everyone present was given the chance to briefly introduce themselves and their interest or role in using ArchiMate. This took up a fair portion of the meeting, but gave everyone the opportunity to hear about how ArchiMate is being used, and to put some names to faces. Speaking of which, also present at the Users Group was the leading expert and author of “Mastering ArchiMate“, Gerben Wierda. And here are the 3 Amigos, finally together in one room:

Overall, the conference and user group meeting was productive and informative and there was not enough time to talk to everyone. We had fun with our presentation and, we hope, offered a possible vision for the future and highlighted the potential for interesting developments once different stakeholders come together to work with Open Data and tooling.

The takeaways for the whole event for us, at least, were:

(Special thanks to Andrew Josey and The Open Group for facilitating this.)