2013 has proven to be a productive year for all things Archi, and also personally. It also turned out to be a transitional year in many ways. Archi 2.4 was released in early December 2012 and this was the last release on the old website. Archi continued throughout 2013 to be downloaded at an astonishing frequency – around 1000 downloads a month – by all manner of enterprise architects, consultants, students, training organisations and many others. I wrote about the genesis of Archi and its success on my personal WordPress blog. I think it makes for interesting reading. 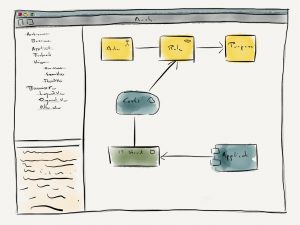 After a break over the summer to recharge and re-align my chakras, I returned to Archi to bring things up to date. In September I created a new home for Archi – this website. In fact you might notice that this website has been redesigned again as from today. Then in November I released Archi 2.4.1, a maintenance release containing some work that I had accumulated throughout the year, and an important bug fix. You can read about the background behind this bug fix on my personal WordPress blog. Also included in Archi 2.4.1 was the results of some collaboration with Gerben Wierda, author of Mastering ArchiMate, to allow you to use the colour scheme for ArchiMate elements that Gerben uses in his book.

I didn’t rest on my laurels, and later in November I released Archi 2.5 which represents the first stage in a general makeover for Archi. This release gave Archi a new icon, launch screen and a default flat look (element shadows are optional) to tie in with the new look of this website and the general trend in UI design today (particularly obvious in Apple’s iOS 7).

Since then I’ve done some more work on Archi in line with the UI makeover theme for the next release – version 2.6, coming soon. I’ve been helped in this work by Jean-Baptiste Sarrodie, also known as Jaiguru. You may remember that Jean-Baptiste already contributed last year with his implementation of “orthogonal anchor points” in Archi 2.4. He is now very kindly making some important contributions to the next version of Archi 2.6, including line colours for elements, connection bend-points snap to grid, curved bend-points, and more. Expect to see some great UI improvements in this next version of Archi. Now that Jean-Baptiste is contributing towards development work, we can be assured of an interesting future for Archi.

ArchiMate 2.1 was released by the Open Group earlier this month. This is a maintenance release and addresses many issues reported in the 2.0 specification. We have made the changes necessary to Archi, and these will also be included in the next release. And talking of the Open Group, I’ve also been very busy working with various parties on the Open Group’s proposed ArchiMate exchange format. Hopefully this will allow all ArchiMate tool vendors to exchange ArchiMate models in an open format.

2013 has been an interesting year for Archi, as it transitions to a new future. 2014 promises to be even more interesting.